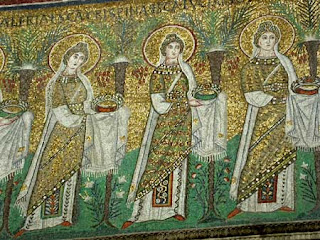 This is interesting… in the wake of the Holy See’s confusing document on consecrated virginity.  Ed Peter‘s wrote:

Now, according to the plain terms of ESI, the Blessed Virgin Mary, archetype of virginity consecrated to God, would not be eligible for admission to the order of virgins, but Mary Magdalene, model for women who, Deo gratias, set aside a promiscuous life, would be eligible.

Something, I suggest, is seriously wrong with such norms.

Hence, the consecrated virgins of these USA are pretty irritated.

The US Association of Consecrated Virgins has said it is “deeply disappointed” at new rules issued by the Vatican that appear to say consecrated virgins need not be virgins.

The group has taken issue with section 88 of the new document, which states: “Thus to have kept her body in perfect continence or to have practiced the virtue of chastity in an exemplary way, while of great importance with regard to the discernment, are not essential prerequisites in the absence of which admittance to consecration is not possible.”

The USACV said it was “shocking to hear from Mother Church that physical virginity may no longer be considered an essential prerequisite for consecration to a life of virginity.”

“The entire tradition of the Church has firmly upheld that a woman must have received the gift of virginity – that is, both material and formal (physical and spiritual) – in order to receive the consecration of virgins,” the association added.

They said that the new rules do not change the prerequisites for consecration as stated in the Rite of Consecration to a Life of Virginity, which says: “In the case of virgins leading lives in the world it is required that they have never celebrated marriage and that they have not publicly or manifestly lived in a state contrary to chastity.”

The USACV says that this means virginity is a minimum requirement for consecration, and they add that there are “some egregious violations of chastity” that, although they do not violate virginity, do disqualify women from receiving consecration.

The Vatican issued the document, titled Ecclesiae Sponsae Imago, last week after requests from bishops throughout the world for clarity on the role of consecrated virgins amid an upsurge in vocations.

A consecrated virgin is a woman who has never married who pledges perpetual virginity and dedicates her life to God. Unlike a nun, she does not live in a community and leads a secular life, providing for her own needs.

Fr. Z is the guy who runs this blog. o{]:¬)
View all posts by Fr. John Zuhlsdorf →
This entry was posted in ¡Hagan lío!, Pò sì jiù, The Drill and tagged consecrated virgins. Bookmark the permalink.