The lost tomb of St. Jerome, Doctor of the Church. A Roman mystery.

If there have to be reality TV shows or treasure hunt movies, I propose finding the tomb of St. Jerome (+420) in the Basilica of St. Mary Major in Rome.

For a couple years I have posted something about Jerome’s burial place.  Here it is again.

This is an interesting story and I dug into it a little. This is what I found.

Apocryphal lives extolling [Jerome’s] sanctity, even his miracles, were quick to appear, and in the eighth century he was to be acclaimed, along with Ambrose, Augustine, and Gregory the Great, as one of the four Doctors of the Church.[2] In the middle ages his works were eagerly copied, read, and pillaged; while towards the end of the thirteenth century the clergy of Santa Maria Maggiore, at Rome, were to persuade the public, perhaps themselves too, that his remains had been transported from Bethlehem to Italy, and could be venerated close to certain presumed fragments of the Saviour’s crib.[3]

Note 2: This was formally ratified by Pope Boniface VIII on 20 Sept. 1295: see Corpus iuris canonici II, 1059 (ed. E. Freidburg, Leipzig, 1879-81). The original number four (the list was later to be greatly expanded) was chosen so that the Doctors could match the Evangelists. 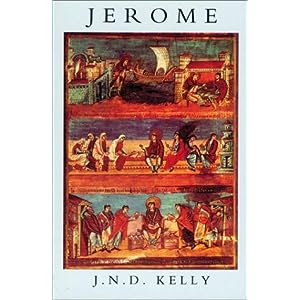 In the Acta Sanctorum for 30 September, under the entry for St. Jerome, we find the following section with its articles:

LXV. Corpus Sancti ex Palestina Romam translatum, depositumque in basilica s. Mariae Majoris. The body of the saint was brought to Rome from Palestine, and put in the Basilica of St. Mary Major.
LXVI. Inquiritur tempus quo Sancti corpus Romam delatum. An investigation is made into the time when the body of the saint was brought back to Rome.
LXVII. Corpus Sancti depositum prope aediculam Praesepis, conditum deinde ibidem altare, sub quo positum, ubi mansit usque ad pontificatum Sixti V, quando dicitur clanculum ablatum & absconditum. The body of the saint was placed near to the small chamber of the Crib, established then right at the same altar, under which it was placed, where it remained until the pontificate of Sixtus V, when it is said to have been secretly taken away and hidden.
LXVIII. Corpus Sancti clanculum ablatum & absconditum dicitur, ne transferretur alio a Sixto V: deinde frequenter frustra quaesitum. The body of the saint is said to have been secretly taken away and hidden lest it were to be transferred to another place by Sixtus V: aftward it is frequently sought in vain.
LXIX. An reliquae, sub altari principe S. Mariae Majoris inventae, videantur illae ipsae, quae ut corpus S. Hieronymi ad illam basilicam fuerunt translatae. When the relics found under the main altar of St. Mary Major which had been transferred to that Basilica seem to be the very same as the body of St. Jerome.
LXX. Admodum verisimile & probabile inventas esse S. Hieronymi. Clearly the [relics] found are most like and probably of Saint Jerome.
LXXI. Respondetur ad objectionem ex reliquiis Nepesinis: reliquiae, quae verisimiliter sunt S. Hieronymi sub mensa principis altaris depositae. An objection is answered about the relics at Nepi: relics placed under the main altar which more than likely are those of St. Jerome.
LXXII. Reliquiae Sancti in pluribus civitatibus Italiae, Galliae, Germaniae, Belgii, & aliis provinciis. The relics of the saint in more cities in Italy, France, Germany, Belgium and other provinces.
LXXIII. Cultus S. Hieronymi: festivitates eius & Officia. The veneration of St. Jerome: his feasts and offices.

Here is the page where these articles begin. If you want to have a fuller experience of the joys (the chore) of reading the Acta Sanctorum for any length of time click here for a larger image.