During the American Civil War a Union regiment is being transported by ship.  They fall into a tunnel of light and emerge on the ocean of another planet.  They rapidly encounter the descendants of 10th century Russians.   There is conflict.  But their real conflict is not with other humans on this planet, brought here during different centuries from different places.  The true enemy are the 10′ tall human eating aliens who slowly over decades migrate in a circle around the lands harvesting their “cattle”.  The Yankees decide that they are not going down without a fight.

I have been working through a series by William Forstchen, who wrote the scary EMP survival novels beginning with One Second After (US HERE – UK HERE).  This series is quite a different genre Civil War Science Fiction.   However, it has many of the same elements, which will become apparent as you read them.   They are ripping good yarns.  The first of the series, the Lost Regiment series, is… Rally Cry 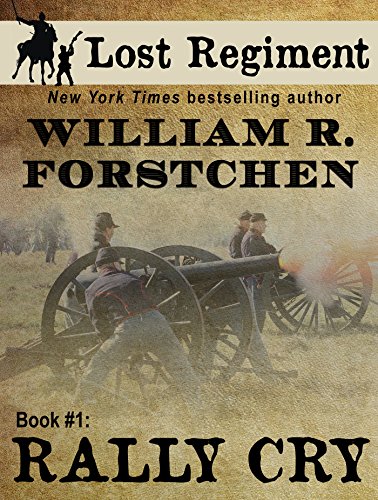 Later, there will also be the descendants of ancient Rome, Latin speakers, who become allies.

They are quite well written, with good character development.  He has quite the imagination coupled with a solid knowledge of 19th century technology.

I am several books in now.   There was something which I thought you would enjoy.

Speaking of Latin, at one point, marching into battle against the flesh-eating Horde, the newly formed and trained regiments of Yankees, Rus, and Romans sing as they march.

Their tattered flag fluttered in the breeze. Vincent stopped to look at it—“Hawthorne’s Guard,” emblazed in faded gold letters upon its stained silken folds, an action the men had done themselves when he was reported missing after the first defense of Suzdal. He looked over at Dimitri for a moment, distant memories stirring. At the front of the column were the corps banners, and the flags of the two republics and of the army moving to join them.

Marcus edged his mount up beside Vincent’s.

A trumpet call echoed and a thunder of drums sounded. The first battalion wheeled out of line, went into column of fours, and turned to the north and the road to Hispania. As it approached the review stand, the 7th Suzdal moved out in front and marched past. Vincent drew his saber and saluted the colors as they passed. The crowds lining the walls and crowding the hills to the west cheered wildly.

The song started somewhere in the middle of the mass formation, and within seconds the entire army started to sing “The Battle Hymn of the Republic” in Latin.

It sounded so strange to Vincent, as if it were some absurd schoolyard exercise led by a warlike and demented teacher of ancient languages. Yet it had a power to it, as if an ideal engendered within the song could somehow leap across the universe.

“It’s worth dying for,” Vincent whispered.

The enemy in this series is seriously nasty.  Forstchen paints a lush picture of their migratory warrior culture, their spirituality and gruesome customs especially in regard to their “cattle” whom they harvest.

I found online a Latin version of the Battle Hymn… alas a verse is missing.

Also for your summer reading – or any season reading pleasure – check out Chris Kennedy‘s rollicking books in which I, Father John Zuhlsdorf, am a character!  I die painfully … once… but at this point in the tale I’m alive again.  And I have some of the best lines in the books!   For more, check this out HERE.  They, too, are military, and, again, there are very bad flesh eating aliens.  I’m sensing a theme.  I’ve described Kennedy’s books in the past as being Galaxy Quest meets The Magnificent Seven crossed with Stargate and an added dash of Indiana Jones.  The whole saga starts with the Chinese invasion of Seattle…