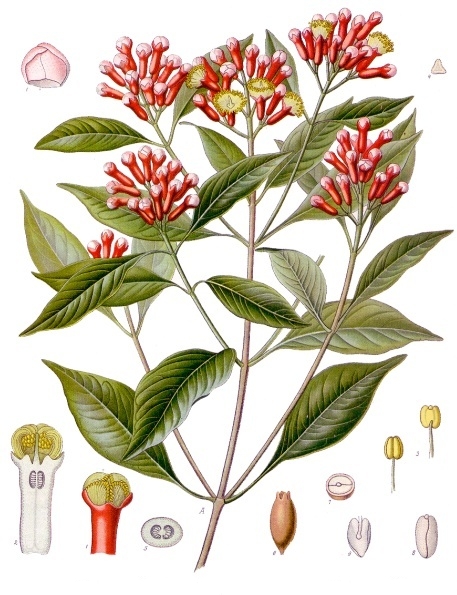 Summer notwithstanding, I have had a hankering for something Roman that I haven’t had for a while.

In Italian, chiodi … “nails” are cloves… but indifferent cloves.  They could be cloves of garlic (which are spicchi).  However chiodi di garofano are cloves of, well, cloves.   Be aware that garofano can have to do with dianthus, or carnation, and thus the symbolic “pink” of paintings and, also, cloves.  There is etymological give and take between the words.  But if you talk about chiodi di garofano, you mean the spice, because as the flowers from the Syzygium aromaticum dry out, they look like little nails.

Again in Italian, if you are going to “clove” something, you wind up with a “garofolato”.

So, what I made was garofolato di manzo, beef.  It can done with veal and ox.  Since the essence of the humble Roman fare is to make the very best of the humblest ingredients, even the quinto quarto, I opted for the classic cut of beef for the garofolato, the girello, which is the eye of round (in these USA, but in the UK I think it is the silver side).

Off to the store I went to obtain a roast of eye of round.  No luck.  They only had little pieces.  So I entered into a dialogue with the guy at the meat counter and set an appointment to pick up my eye of round the next day.  Meanwhile, I got everything else together.

I also started texting with The Great Roman.

I could sense that he came out of his chair when I said that, summer notwithstanding, I was going to make garofolato.   “My granny made garofolato to die for,” quoth he. “Here’s the recipe closest to what granny did.”  HERE

With recipes like this, it is probably better to get the theory of the dish, understand its inner logic and outcome, rather than go by precise measurements.   I gleaned that this is a classic in umido preparation.  I had to have that girello and it had to be pilottato, it had to be larded (where’s that larding needle again?).  I needed what the Romans call persa or maggiorana, marjoram.  I needed red wine from the area: I opted for Montepulciano.  I needed to truss the roast, hence string.  The usual would be necessary, including onion, carrot, celery, and cloves.

I set myself to the task to make this wintry Sunday dish during a summer week.  Why? Because I wanted to.  As well, I betook myself back to the Roma and the castelli, thinking about the rhythm of rising, Mass, slow food with slow patience, and slow meals.  Would that the Great Roman and family were here for the fare, or I were there.

I had some lard, but the wrong kind: too soft.  I did use some in the casserole for browning.  I opted for bacon for the larding.   Keep it cold, if you want my advice.  Salt pork might have been easier to work with.  I didn’t have any. Searching the back of the drawer revealed the needle.  With this type of larding needle you grab the lard with its little jaws and then draw it through.  Tricky.  I have put a different type on my wishlist, into which you insert the lard and then, having pushed it through, you withdraw the needle, leaving the lard behind. I need one of those.  I had one once, but it is long gone.

Larding meat, along with barding, or putting a layer of fat around the meat, helps to prevent it from drying out or getting tough in the process.  Eye of round is really lean, so larding helps a lot. So I larded and then I also studded the meat with garlic and cloves and marjoram, as suggested in the prosaic recipe. Some medical instruments are handy in the kitchen.

I was going to truss as if my life depended on it, but the warning on the string changed my mind. Browning time.   All sides.  Because I used bacon, I backed off on the salt. Out comes the meat and in go the veg. It would have been irresponsible not to test the wine. Tomato and cloves.  I used more clove than suggested in the prosaic recipe, because, frankly, spices are insipid here. Time to check and to turn. After a few hours… I extracted the roast and set it to cool.  Too often food is served to quickly and too hot.  Meat always needs a little time to settle down.  Also, food that is too hot shocks your taste buds.  Time to make the other thing Romans might eat with this: broccoletti.  We don’t have exactly the same thing here, but it’s pretty close.  This is done in a smoking hot pan with olive oil and garlic and red hot pepper and a tiny splash of water at the very end to finish the job. If you are wondering, it was fork tender.  I could have been bolder with the marjoram, so I added it as a garnish.

After, a little cheese and more wine.  Coffee and an amazzacafe.

This is made with variations all over Italy.  With cloves it is particularly Roman.  Farther north they make stracotto and brasato.

The avanzi or left-overs will make great sandwiches and, along the large quantity of sauce I produced a fantastic way to prepare fettucine all’uovo.  I’ll freeze some, too.  If I have some time, perhaps I’ll make the fettuccine from scratch.  I haven’t done that for a while.

For those of you who want to work your panties into a twist about eating “fancy food”, this is also called “pot roast”.  It’s just good pot roast, rather than the jejune, flat, anemic, wearisome, spiritless stuff that most people who get the undies bunched by these posts are used to.  What thanks do we show to God by taking good ingredients and making bad food out of them, stale, flat and unprofitable?

Good food doesn’t have to be costly.  You just have to know, as our forebears did, what to do with humble, on hand ingredients.    Eye of round is certainly not your most costly cut.  The rest is, well, simple stuff.  There’s nothing fancy about bacon, carrot, etc.  I had to buy marjoram, which in happier years I would have walked to the garden to pluck.  I bought the wine…  as one does, right?   The tomatoes were a gift from my wish list (THANKS!).

So, another recipe under my belt.  When winter comes, I’ll be able to prepare it with even greater ease and effect.

Fr. Z is the guy who runs this blog. o{]:¬)
View all posts by Fr. John Zuhlsdorf →
This entry was posted in "How To..." - Practical Notes, Fr. Z's Kitchen and tagged beef, cloves, garfolato. Bookmark the permalink.