FILM REVIEW: The War of the Vendée

“They have killed our temporal king. Now they want to kill heavenly king. Who is worth fighting for, and even dying for, if not Him?”

That is a line from the soon-to-be released film by Navis Pictures called The War of the Vendée.  US HERE – UK HERE

I received a review DVD today and watched it this evening.

Given the professional beginning, with the good score, I was soon scratching my head at age inappropriate actors. They were far too young and, as young actors, they performed, well…. like young actors. I started to wonder how I could write positively about this film. My suspicion that I was missing something of critical importance drove me to the Navis Pictures website, which has as its goal the creation of a new genre of film: Children’s Cinema.

The some 250 young actors in this film are all under 21.  This is, therefore, a direct contradiction to the old adage about never working with kids.

I don’t know how it escaped me, but I didn’t know about this aspect of the film before I stuck the DVD into the machine!

Navis, which means ship in Latin, like the Barque of Peter, wants to inspire young people to get into the film industry and other performing arts at a young age, presumably to begin to transform the industry from within. The director, Jim Morlino – yes, like the bishop but not too closely related he tells me – explains his project in a 3 minute video HERE.  Great idea!

Once you give yourself over the fundamental point of this project, this genre, you look past the rough spots, and enjoy the production immensely.

I suspect this film will be inspiring to children, both because the story is historically important but also because it is by young people for young people.

The music score was very good. The composer, Kevin Kaska, was top notch (which is one of the reasons why I was puzzled at the beginning by the age of the actors). Kaska orchestrated the music for the Batman movie The Dark Knight, and the The Passion of the Christ.  The War of the Vendée is Kaska’s second film as a composer.

If I ever get that three-hour a day call-in talk radio show, I will probably ask Navis for permission to use a clip from for my bumper music.

Of liturgical interest are portrayals of Holy Mass. I was outraged… outraged, I say, to see a maniple on the right arm of the young actor priest! Can you imagine?   If people are going to make movies about the old days, why don’t they talk to someone who knows what’s what?  And the Latin… mon Dieu!  (I’m kidding, of course.)  Later in the movie, for Mass before a battle, they get the maniple right… er left…

[UPDATE: I had a note from Jim Morlino of Navis Pictures who wrote: “RE the maniple – scene was originally shot with the correct placement of the maniple (I and many in the film are TLM folk) Due to an error on my part in maintaining “screen direction” for the Mass scene, I had to digitally “flop” the shot, and so, the Maniple appears to be on his right arm…when in fact it was correctly placed on his left arm the entire time. I knew that was going to raise some hackles, but there was nothing I could do about it.”  No hackles from Fr. Z, Jim.  I was yankin’ yer chain.] 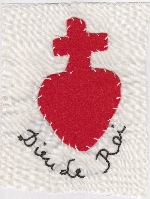 The age of the actors sometimes made it difficult to know who was intended to be an adult and who was a child.  The fact that these were kids, meant that they weren’t using real guns.  They had to add effects, but they did a pretty good job.  And there is a battle scene that turned out pretty well, along with a “follow the bullet” moment and the death of a good guy.

I loved the bad guy official of the Republic with the braces on his teeth.

Another point is the prominent positive role of the female characters.  This is perhaps best captured in the line: “Men of the Vendée, either pick up your weapons now, or we will wield them for you!”

In the balance, the filmmaker and composer and these kids told a good story and they told it well.  There were moments of humor, but serious things are presented throughout about Catholic identity, faithfulness, the role of men and of women in life, honor, and the virtue of religion.

It is timely that this film comes out even as governments are today attacking freedom of religion and the Catholic Church.  I could well imagine a parish screening with a discussion period before and after, especially talking about contemporary attacks on the Church and our  future choices.

We may need inspiration from the men and women of the Vendée again, and very soon.

Here is the trailer:

The disk has French and Spanish subtitles, director and cast commentary tracks, widescreen options and is regionless.

They are giving a 50% discount to customers in France!

And do they need it!  This film comes at a time when we need that New Evangelization of which Pope Benedict has spoken.

It is good to see Catholic films being produced by and for young people. The War of the Vendée could introduce children (and their parents) to this important moment in our Catholic history. If there is sometimes a family playhouse feeling to the film, it also teaches about a dark time in our larger Catholic family history about which every Catholic should know. Thus, The War of the Vendée will clue a wider (and younger) audience into that period in France’s bloody history, just as There Be Dragons did to a certain extent about the Spanish Civil War, or Of Gods and Men did about the monks who were martyred in Algeria.

There is a moment in the movie which echos Navis’ “Children’s Cinema” purpose of the film.

A little boy playing a little boy, Remy, is not permitted to attend a meeting of adults (played by boys… it can get confusing). When Remy pouts, his sister (I think) remonstrates with him saying”

“Remy, don’t be so anxious to be older. Can’t you stay young just a little while longer?
“Being young’s no fun. Who wants to be a child?
“I know someone who wants everyone to be like a child. Someone who knows your name and who loves you so much He became a child Himself.”
[She gives little Remy a patch that the men wear. He says:]
“Now I’ll look just like papa when he was my age!”

The film, with its high production values, does indeed look like a grown up film.

I imagine that these kids had a blast making this movie. You and your children will enjoy watching it.  They will probably want to be more Catholic.

Will we be as ready and the men and women of the Vendée?

They were willing to fight and even die for the honor of their Heavenly King and Holy Mother Church.

Fr. Z is the guy who runs this blog. o{]:¬)
View all posts by Fr. John Zuhlsdorf →
This entry was posted in New Evangelization, Our Catholic Identity, REVIEWS, The future and our choices, The Last Acceptable Prejudice and tagged France, Napoleon, Navis Pictures, religious liberty, review, The War of the Vendee, Vendée. Bookmark the permalink.