This is from SpaceWeather…. very cool.

ROCKETS DUMP CHEMICALS INTO NORTHERN LIGHTS: Last night (April 5th) in Norway, researchers at the Andøya Space Center launched two sounding rockets into a minor geomagnetic storm. The results were out of this world. Aurora tour guide Kim Hartviksen photographed glowing blobs of blue and purple caused by the rockets dumping chemical powders into the storm: 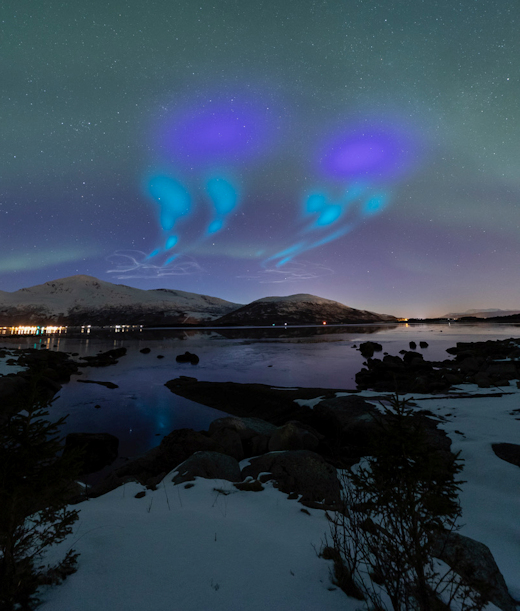 “Residents for hundreds of miles were taken by surprise by these strange lights, which prompted calls to the police and ‘The aliens are coming!’ hysteria!” says Chris Nation who runs the Aurora Addicts guiding service.

When the night began, Nation, Hartviksen, and their clients were treated to a display of auroras, ignited by a stream of solar wind buffeting Earth’s magnetic field. “As the auroras started to ebb away, our friends at Andøya launched their rockets into the fading lights,” says Nation. “The show began anew as the rockets released their payload into the upper atmosphere.”

An automated webcam operated by Chad Blakely of Lights over Lapland in Abisko, Sweden, caught the first puffs of powder emerging from the rockets. “It looked like an invasion of UFOs,” says Blakley. 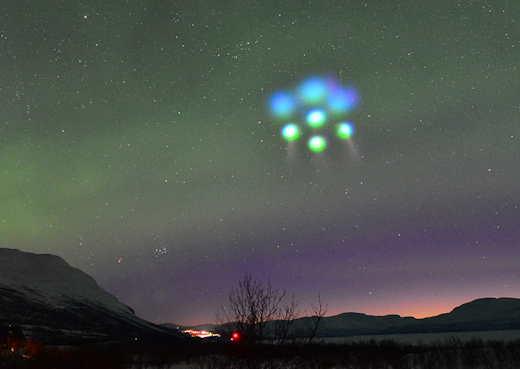 “Soon the glowing blobs evolved into more complicated structures–like two giant squid dancing in the northern sky with an impressive aurora display as its backdrop,” decribes Blakley. “Our webcam has been taking a picture every five minutes for nearly 10 years. These images are by far the most exciting I’ve ever seen it record.”

The name of the sounding rocket mission is AZURE–short for Auroral Zone Upwelling Rocket Experiment. Its goal is to measure winds and currents in the ionosphere, a electrically-charged layer of the Earth’s atmosphere where auroras appear. Specifically, the researchers are interested in discovering how auroral energy might percolate down toward Earth to influence the lower atmosphere.

The twin rockets deployed two chemical tracers: trimethyl aluminum (TMA) and abarium/strontium mixture. These mixtures create colorful clouds that allow researchers to visually track the flow of neutral and charged particles, respectively. According to NASA, which funded the mission, the chemicals pose no hazard to residents in the region. Aurora alerts: SMS text, email.

Update–a movie! “Here is my realtime video of the surprise rocket launch last night from NASA/ASC,” reports Ole Salomonsen of Tromsø, Norway. “I was shocked when I saw this in the night sky facing north, I was not aware of the launch.

Fr. Z is the guy who runs this blog. o{]:¬)
View all posts by Fr. John Zuhlsdorf →
This entry was posted in Look! Up in the sky! and tagged aurora borealis, SpaceWeather. Bookmark the permalink.