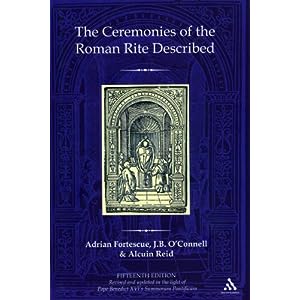 There is a piece on The Catholic Herald‘s site (full disclosure: I write regularly for CH now) about Benedict XVI’s provision in Summorum Pontificum and Universae Ecclesiae by Alcuin Reid who reedited Fortescue/O’Connell Ceremonies of the Roman Rite Described.

It may seem rather odd that Pope Benedict XVI?has expended so much energy on rules about the use of the old “Latin Mass” – after all, it would appear that most Catholics are content with the modern liturgy in the vernacular. [Which, to date, they really have never experienced.  The new translation will help to change that.  But… quaeritur…] Why, then, yet another set of rules from Rome in this Instruction?

The answer is found in the fact that, as the Instruction insists, the older rites are a “precious treasure to be preserved,” and that the Holy Father wants to offer this treasure “to all the faithful”, not as a quaint museum piece but as a living source of life and grace for the whole Church of today and into the future. All laity, clergy and religious should have access to its diverse riches. [The clear implication is that all should be exposed to the traditional Form.]

These latest rules envisage the inclusion of recent saints and some new texts in the older liturgy. They even foresee new editions of the missal and other liturgical books of the older rites: the older liturgy will continue to exist [attetnion…] and develop as it has over the centuries up until the Second Vatican Council. But it cannot, however, now have certain modern practices (altar girls, extraordinary ministers of Holy Communion, etc) imposed on it. Its integrity is guaranteed.  [NB: He doesn’t seem to think that the inclusion of new texts puts its “integrity” at risk.  Neither do I, depending on the texts, of course.  How can the inclusion of new saints harm its integrity?  How can the option of some additional prefaces be harmful?]

Of course, there are historical realities behind this Instruction and the 2007 Motu Proprio Summorum Pontificum which it clarifies. [1] In the first place there is the controversy over the liturgical changes that followed the Council. [Many changes were not foreseen by the mandates of the Council Fathers.  But… quaeritur…] Were they a legitimate development or did they involve a rupture with tradition? Neither of these documents settles that question, but the Instruction does, significantly, speak of the development of the Missale Romanum “until the time of Blessed Pope John XXIII” and of the “new Missal” approved for the Church in 1970 by Paul VI. [Sounds rather like a rupture.  No?] This authoritative recognition of a clear distinction between the two – both of which, the Instruction maintains, must be seen to be legitimate and valid – does admit a clear “difference” between that of Paul VI and what came before. Discussion of the implications of this will continue.  [Ever since Summorum Pontificum came out, I have argued that the Pope provided a juridical solution to the relationship of the EF and OF, but he did not settle the issue of whether there were two distinct rites. In Universae Ecclesiae, which moves the discussion into more theological grounds, with its reference to Summorum Pontificum as part of the Holy Father’s Magisterium, perhaps we are moving closer to an answer.]

[2] And then there is the more recent historical reality of widespread opposition to the use of older liturgical rites (not just the Mass, but the sacraments and the blessings and so on, as the Instruction makes clear) on the part of bishops, religious superiors and priests. That is why the Instruction was necessary: even after Summorum Pontificum established that in Church law everyone who wants the older liturgy is entitled to it, this opposition continued, sometimes [often] from high-ranking prelates. This Instruction underlines these rights and makes explicit what was implicit in Summorum Pontificum, namely that if these rights are denied Catholics, be they laity or clergy, have the right of appeal (“recourse”) according to the norms of canon law. It is unusual for Rome to advertise this in an Instruction, but in the light of the opposition it seems necessary.

One of the principal areas of dispute has been what constitutes the “stable group” that is required to request regular public celebrations of the old liturgy. The Instruction dismisses the various straw men put up since Summorum Pontificum in order to block requests for the older liturgy and insists that these groups can be small, can come from different parishes or even dioceses and that they can exist only for the purpose of worshipping the old rites. [And let it not be forgotten that the priest himself can be part of the small, stable group.]

This generosity of interpretation, which runs throughout the Instruction, is a fundamental principle in interpreting canon law: when ecclesiastical authority (the Pope in Summorum Pontificum) grants a favour for the good of people (the continued use of the older liturgy) it is to be applied generously and not restrictively. [odiosa restringenda, favorabilia amplianda]

One issue not resolved by this Instruction is what the older rites are to be called. It uses “ordinary form” and “extraordinary form” as well as “Antiquior Usus” (the “more ancient use”) of the Roman rite. [NB] Some commentators have insisted on an interpretation of “extraordinary” that is quite pejorative: the older rites have been regarded as an eccentric relative, mention of whose existence brings about a knowing smile and with whom close contact is seen as a risk. There is no foundation for this in either Summorum Pontificum or this Instruction. The terms “ordinary” and “extraordinary” are used in a sense of what is statistically normative, that is all. [Well… okay.  That is a good guess at what the Instruction means by Ordinary, though the Instruction does not say… which in itself is very interesting.  The Instruction does say, however, that the two forms are “alongside” one another.] Indeed, in the Latin text “ordinaria” and “extraordinaria” are not capitalised, whereas “Antiquior Usus” is. Given the derogatory use to which “extraordinary form” has been put, it is probably time to set it aside in favour of “the more ancient rites” or some such terminology. [A matter for discussion.]

There are, I suggest, two areas in which the Instruction is weak. [1] The first is in its assertion that seminarians should be given the opportunity to learn the older rites “where pastoral needs suggest it”. Some bishops will use the latitude permitted here to exclude such formation from seminaries. That will only serve to impoverish seminarians’ overall liturgical formation, for regardless of whether a diocese has a clear “pastoral” demand for the older rites, experience and knowledge of them on the part of future priests cannot but serve to enrich their grasp of liturgical theology and spirituality, and lay a good foundation for their liturgical ministry, even – perhaps especially – in the new rites.  [I agree.  This is a weakness.  However, it is understandable that in Japan there may not be quite as pressing a need as, for example, at Allen Hall or the North American College.  “But Father! But Father!”, I can hear the traddies yelling.  “Japan needs the old Mass too!”.  Yes, I agree.  It does.  It is a global need.  But we build brick by brick.  Still, I think that paragraph was a bit bloodless..]

[2] The other weakness is the Instruction’s curious restriction of the older rites of ordination to those communities supervised by the Ecclesia Dei commission in Rome. This denies diocesan bishops the pastoral freedom to judge which rite of ordination is best; it may discourage vocations. Priests have this freedom in respect of celebrations of the Mass and other sacraments: why this ungenerous restriction on bishops? [I have argued that most seminarians would want to be ordained in the older form.] Also, communities who are not under the Roman commission but who permanently use the older liturgy in accordance with Summorum Pontificum could find themselves having to use the new ordination rites. This is an anomaly that needs to be addressed.  [I hope that, soon, a diocesan bishop asks the PCED to grant permission for him to ordain his diocesan priests with the older book.]

These concerns aside, the Instruction Universæ Ecclesiæ underlines the fact that the older Roman rites are here to stay. When Cardinal Joseph Ratzinger was elected pope I wrote that “there is little doubt that we shall see freedom granted to the traditional Latin Mass”. That has now more than come to pass, and decisively. [Do I hear an “Amen!”?]

It may seem strange that this matter is a priority for Pope Benedict. But we need to remember, as he wrote in 1997, that “the true celebration of the sacred liturgy is the centre of any renewal of the Church whatever”. In the Holy Father’s judgment, free access to the Usus Antiquior is a necessary component of such renewal.  [I call it “the tip of the spear”.]

Dr Alcuin Reid is a cleric of the Diocese of Fréjus-Toulon, France, and editor of Ceremonies of the Roman Rite Described

Good analysis and he is surely correct about most of his points.  Even his guesses are rooted in sound reasons.

There won’t be a New Evangelization without a renewal of our worship.

Fr. Z is the guy who runs this blog. o{]:¬)
View all posts by Fr. John Zuhlsdorf →
This entry was posted in "But Father! But Father!", Brick by Brick, Linking Back, New Evangelization, Our Catholic Identity, SUMMORUM PONTIFICUM, The Drill, The future and our choices, Universae Ecclesiae and tagged Alcuin Reid, Benedict XVI, Catholic Herald, SUMMORUM PONTIFICUM, the tip of the spear, Universae Ecclesiae. Bookmark the permalink.